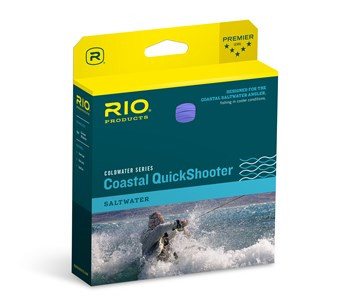 RIO's Coastal QuickShooter line features a clear intermediate head, and is designed specifically for anglers fly fishing off the coast in cooler conditions. The line features a short front taper that has no problem turning over baitfish and shrimp patterns in typical coastal winds, and has a short, easy casting head to help the rod load at close range.

Every fly fisherman is looking for a slicker line, and for good reason. Slicker line means longer casts, which is something all anglers strive to achieve. XS Technology is the latest development from RIO's lab coats that focuses on creating an ultra slick line, with dirt-repelling tendencies.  XS (Extreme Slickness) Technology began when RIO's chemists began reformulating conventional chemical combinations. Although RIO's formulas were great, our scientists are fly fishers, and by definition they want an even slicker fly line - it's just part of the deal. So first, they tackled the polyvinyl chloride (PVC) coating and through intense scrutiny down to the polymeric mix level, (say that 10 times fast) they defined some fundamental limitations. Out went the old PVC/silicone formulas and by methodically adding a little more of this, a little less of that, and a pinch of secret sauce, the lab coats cooked up a completely new and improved recipe. With XS Technology, RIO has developed a fly line that is slicker, more stable, and far less apt to attract dirt, and paired with AgentX Technology, it engineers a line that is less dense, casts further and more accurately, floats higher, lasts longer, and offers more consistent performance cast after cast, strike after strike, fish after fish.

DualTone is a system perfected by RIO that marks the sweet spot of a fly line by providing an obvious color change in the line. The design of every fly line taper, its most likely application and each individual line size is carefully taken into account, and the location of the color change is unique to each fly line.  Every line model and size is tested on a selection of fly rods to find the ideal place where the rod loads, and the color change starts at that point. With the DualTone system it is easy to see how much line to strip in, where to pick up a cast, how much line can be held in the air when false casting, and when to make the final cast.